History of the Magnificent Jersey Breed

The Channel Islands are located at the northwest coast of France and the south coast of England. The cattle which are located there still today, have been there for thousands of years, with the exception of the Alderney cattle.

During WWII, most of the pure-breed Alderney cattle were removed from the island of its name, to Guernsey in the summer of 1940, because the island was then occupied by the Germans and it was difficult for the few remaining islanders to milk them. On the Isle of Guernsey, the cattle were interbred with local breeds. The few pure-breed cattle remaining on Alderney were killed and eaten by the Germans in 1944. 1

At an undetermined future time, the Alderney (Jersey) cow was migrated to the Isle of Jersey and became estabished as the predominant dairy cow on that island, eventually being exported from there throughout the world. The breed name was then established as "Jersey", forgoing it's former historical beginning.

Up until this time, the Channel Islands of Alderney, Jersey and Guernsey, produced some wonderful dairy breeds of cattle. It was the Alderney cattle who were “deer like” in conformation with wide bulging eyes and fine boning. These special traits are what we now admire in the Jersey cow as referred to by Willis P. Hazard in 1872, below:

The animal known in England and elsewhere under the name of the Alderney cow, is the same which is now under our consideration. The reason for the breed going under the name of Alderney is, that from that island the first were exported to England. In form, the Jersey cow is deer-like, and small in size; the colors mostly prized are the light red and white, the brown and the fawn; brindled specimens are rarely seen; they are not at all valued, and may be purchased extremely cheap. The cow is naturally quiet, so much so that a mere child can manage her. She had always possessed the head of a fawn, a soft eye, an elegant crumpled horn, small ears, yellow within, a clean neck and throat, fine bones, a fine tail; above all, a well formed, capacious udder, with large, swelling milk veins. 2 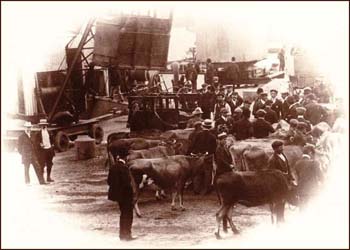 In the photo above from 1863, standard Jersey cattle are being sold right off the boats in America.
Notice the sizes of the cattle horns, white spots, darker coats and sizes compared to the men. These
were not the miniature sizes we have today in America...these are the original Jersey cattle adored today.

In 1789, the Jersey breed was already considered to be far superior to any known dairy cow in production. Her milk was rich and plentiful while her cream was unsurpassed in butterfat. The local legislature passed a law that banned importation of any other horned bull, cow, or heifer to the island under stiff penalty. And if caught doing so, the animals being brought in, were to be killed immediately with the meat given to the poor. Thus, the law remains to this day…no foreign horned cattle are allowed to come to Jersey with the exception of butcher’s meat. Guernsey cattle were not deemed foreign, but there were relatively few of them present on the island of Jersey. 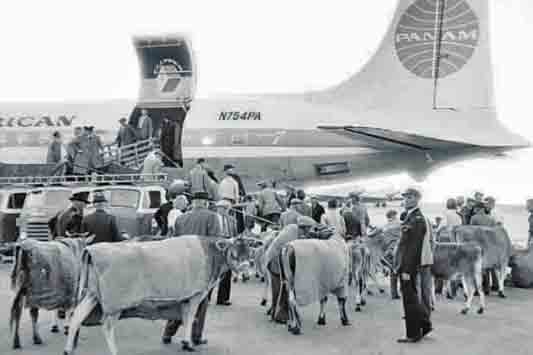 Note: All of the original Jerseys had horns naturally, as well as black noses.  Polled cattle and light colored noses were a sign of crossing with Guernsey, Ayrshire or other breeds.  These cattle were tied out daily for grazing purposes using tether straps around the horns...polled cattle would have prevented this.  The polling we see today in our American Miniature Jerseys are the results of outcrossing with other polled breeds of cattle.

There were also distinct differences between the cattle from one side of the island (Jersey) to the other. The north/northwest coast of Jersey is high and rocky with short, lush vegetation. Thus, the cattle from this side of the island were smaller (45" - 48") and very fine boned, yet very hardy. On the southward facing part of the island, the terrain was very lush in pasture, sloping gracefully to the sea coast. The cattle here grew much larger (46" - 50") and were considered to be more delicate. It was then advised to never out cross this breed, but instead to cross the smaller cattle of the higher mountainous region with those of the lower region. These larger sized cows seem to be the most profitable and desired cattle of this breed. But, the smaller cows can get by with less forage and seem somewhat hardier than their larger counterparts. They can also be kept in smaller acreage, thus, more cattle can be maintained to produce more calves to sell.

“A large Ayrshire or Dutch cow, giving 4000 quarts of milk during the year, will produce an over-supply during one season, and go entirely dry at another. She will consume as much food as would support two smaller  bodied Jerseys giving each 2000 quarts of milk, one coming in in the spring and one coming in in the fall. In perhaps a majority of instances, accommodation can be furnished for only one cow, and food for only one smaller one. For such cases the smaller bodied Jerseys are especially adapted, such as will give ten quarts of milk at their flush (freshening), and not fall below three quarts within six weeks of the next calving; the cream increasing in proportion and becoming richer as the quantity of milk decreases, thus maintaining a satisfactory quantity for at least ten months of the year, and yielding enough for necessary use during the eleventh.” 3 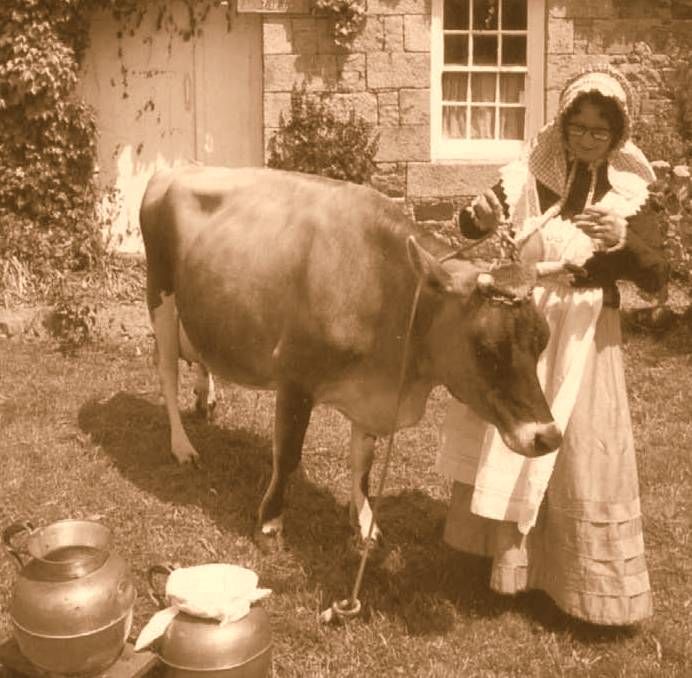 The Jersey breed is known for its richness of cream and volumes of it. It is also thought that when the cows are forced to produce larger quantities of milk, it gets thinner with a smaller cream band. The Jersey carcass as beef, has a yellow fat and should not be hanged for aging longer than 7 days to prevent the fats from turning rancid. This is because the Jersey is not known to digest the beta carotene from its food. That stored beta carotene is the reason for the rich yellow color of the milk, cream and carcass fat.

During the late 1800’s, the exportation of the original Jerseys were high in demand into the USA and around the world, but only in the taller sizes. So, many of the original smaller animals were hunted down and killed to keep them from breeding more of the smaller cattle, which did not sell well at that time. The more moderately sized cattle were considered to be the “perfect milk cow” because of her size not too big for the smaller homestead farm nor too small to produce enough to feed the family with ease.

Today, the original Alderney cattle are extinct on that island with only the crossed bloodlines still remaining in the Jersey’s and Guernsey’s of today.

(1,2,3) Hazard, Wilis Pope, The Jersey, Alderney and Guernsey Cow:   How to Choose, Manage, and Breed to the Most Profit